London is the Place for Me; Handmade fair, Kirstie Allsopp and Hygge.

- September 19, 2016
This weekend Mr Angel Jem (OK, Peter of Peter Kneale Solicitor. Let's not pretend anymore) had a day's training to do in London of all places. Would I like to go to? It would mean I was all alone.... in London... all Saturday.
Would I like to go???? I don't think I have said YES!! quite as quickly or enthusiastically as since he proposed, and I'm ashamed to say I may have been a little more emphatic about it. I was absolutely happy about the idea of a day alone in London anyway since my little jaunt for The Chase last June which I very naughtily never blogged about! I was quite happy with the idea of just sauntering around and watching the world when I found out that The Handmade Fair was on just the weekend I was there. 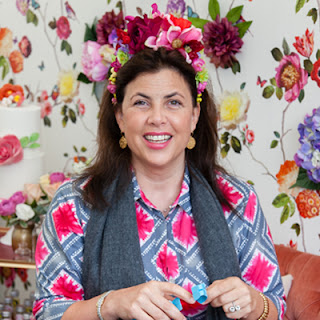 I like Kirstie Allsopp anyway. Her programmes are fun to watch, and what she can do with a junk pile is nobody's business. I signed up, dressed up and went.

On the advice of my husband, I wore a summer dress. Big mistake. Although on the Thursday I would have fried in my dress, by the Saturday when I went it was freezing down at Hampton Court so my first purchase made at Kings Cross was a rather cute Lily Ribbed Scarf from Accessorize. That's about the last sensible thing I bought all day.

I don't mind being alone at events like this, it means I'm not constantly deferring to somebody else's ideas or wants. I can be completely selfish and just do what suits me. I know what crafts I like, and I can just head straight for the sewing/crochet/painting/dollmaking/christmas/christmas/christmas without someone else wanting to go anywhere else.

It also means that at dinner and break times (I still think too like a teacher at the moment, don't I?) I can talk to other people. I spoke to several nice ladies all different ages, jobs and roles in life, all of whom were happy to talk to the mad, fat lady on her own. A smile is the best thing to wear at all times.

What's that you say? What did I buy? Later... possibly tomorrow. I need to unpack it and photograph it. Let me tell you the rest of my story.

I paid for the Full Experience ticket, at around £30. It included a Super Theatre event, and two workshops. You could choose which events to go to, so when I booked there was a lot of umming and ahhing as I decided.

My Super Theatre Event was Kirstie talking to Amelia Freer, a supernutritionist. I had her book already, but I am more convinced than ever to give it a go, having seen how much better Kirstie is looking on the plan. It's a healthy, gluten free, sugar free plan. I've been writing the shopping list today and it's doable, especially with a spiraliser and a Nuitribullet. This was my one chance to see Kirstie all day, but since I was the third person in and sat on the second row (first row was reserved for VIP people only) I did get a very good look at her! She talks on stage just the way she does on TV and I think that's probably how she talks in real life. I do know she answers her tweets quickly and is very polite, even when people are rude about her. (I wasn't, of course!) 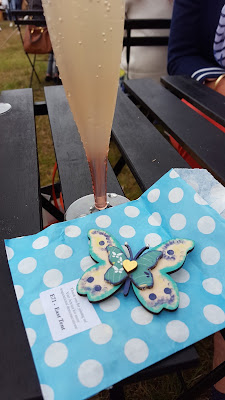 I had paella for lunch and a liquid afternoon tea, in the form of a French 77 cocktail. It has pomegranate syrup in it and was very yummy!

There were two workshops, one before and one after Afternoon Fizz. I made a brooch and a tasselled necklace. You can see the brooch above, with the cocktail. It's very pretty and will just go well with my jade coat, once I get it cleaned. I'm after wool from Yarndale for a scarf as well, but that's next week's adventure.


I spent any spending money I had in two great big shopping marquees. I could have wandered for hours, looking at all the things. I took a couple of photographs, but other stalls were just too busy later in the day to get near.


The makers were mostly very nice and welcoming. I'm on a promise to Joe's Toes to take my cash and get felt slippers from Yarndale next week, but I need to raid a few piggy banks first! I browsed felt makers, glass painters... every craft going. I stayed away from the yarn stalls, mostly, because next week is Yarndale and I will be going again. But it was a cracking day out.

Would I go again? Yes, if it were part of something. I don't think I'd go just for the event, but if it was a weekend away with Sarah or Peter's training, then yes I would.

Was the Full Experience Ticket worth it? I think so; the fact that you had three experiences pre-booked and ready to do meant that the day had a shape to it. I also booked my programme in advance, which was fun. And the Super Theatre was the only chance to see Kirstie close up. I don't know what she spent the rest of her days doing, but I never saw her again.

The rest of my weekend was brilliant as well, but that's my lunch hour gone. I'll have to tell you more next time. Only enough time now to say pop on over to How to Hygge the British Way where I have a new post, Hygge in the Big City about finding hygge in London. What do you think of Kirstie? Is she like Marmite in your house? And would you travel far for a craft event? What's the furtherest event you've been to? (either accidentally or on purpose)
being celebrating crafting enjoying Peter Kneale Solicitor shopping travelling watching

Thanks for stopping by! I love reading your comments.

Popular posts from this blog 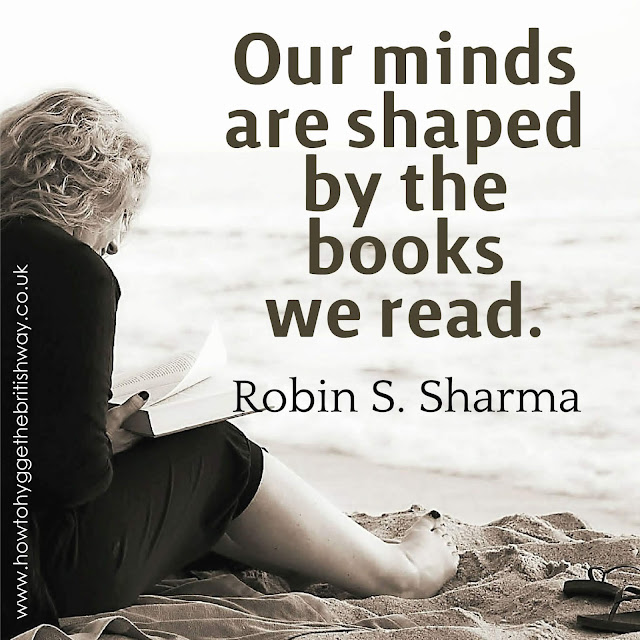 It's my birthday, one of those big birthdays with a 0 at the end. At my last one, 10 years ago, I was teaching, a mother of three aged 10 and under and swept along on a wave of business and busy-ness. My life has altered so much since. I'm no longer teaching, but working as an Office Ninja. I have time to write, and miss it when I'm not writing (I'm between books at the moment, trying to do a proofreading qualification. I miss stringing my own words together, rather than marking up other people's words) so I have the plan in my head for the next book, just gently simmering away at the moment. I'm more confident. I won't take things quietly, and I'm inclined to speak out on the issues that I feel strongly about.  I'm the mother of three young adults. That gives me a degree of freedom and a level of concern that I haven't had for ages. I'm aware that I have lost a degree of control over their lives and decisions even as I have gained back
Read more 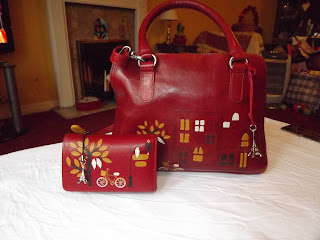 I've never done one of these posts before, probably because I've never had a bag I love so much nor had such an edited life stuffed within. I used to be Akela at a cub pack and I like to Be Prepared, so basically I have always had a Big Bag and everything inside. Headache? Here's a pill. Need scissors? Here! Pen/pencil/stapler/hole punch? All here! But last October we went to London and I bought a small Cath Kidston satchel in the Bicester outlet shop and used it all that week. What a revelation! Small bags are cracking; you don't get given everyone else's 'stuff' to carry and you have to be sure that everything inside your bag earns its place. I used my CK satchel until December, when I had saved enough to get a 'posh' small bag. This is a Bailey and Quinn from Debenhams, bought heavily reduced in the sale, along with its little matching purse . Matching is cute. Princess gave me an Eiffel Tower charm to put on because (I quote) "The p
Read more

I'm beginning to get very excited about Christmas... is this normal? 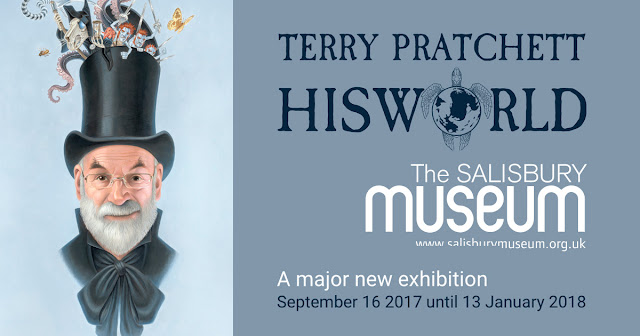 There are 74 days left until Christmas!! This came as a bit of a surprise to me when I looked it up today, as I don't feel anywhere near ready for Christmas. Also, is it my imagination, or have shops not got Christmas in as early as last year? I went looking for wrapping paper last week and couldn't see the sort I was after in Tesco, W H Smiths or Asda. In fact, Asda had no Christmas paper and shelves still full of Hallowe'en! That struck me as rather odd, because when it comes to Back To School the shelves are cleared and replaced by Halloween before school even starts. I think I was hoping for something similar with Christmas. So, in an effort to get Christmas juices flowing, I thought I'd share a few things I'm looking to do or get for Christmas. 1. Visit Salisbury Museum. They have the Terry Pratchett exhibition on, until January 13th and my two sons are keen to go. We live in Liverpool, and there's a long distance between the two places, so we'
Read more

Angel Jem
Mother, wife, blogger, quizzer, Office Ninja, reader, laugher and all round Good Egg. I work for my husband as Office Manager and all points below and manage his online presence. I want to become a paralegal, or to be Donna from Suits.